This week, the company is launching DevHub Labs...a mindset of building a scalable future in local markets 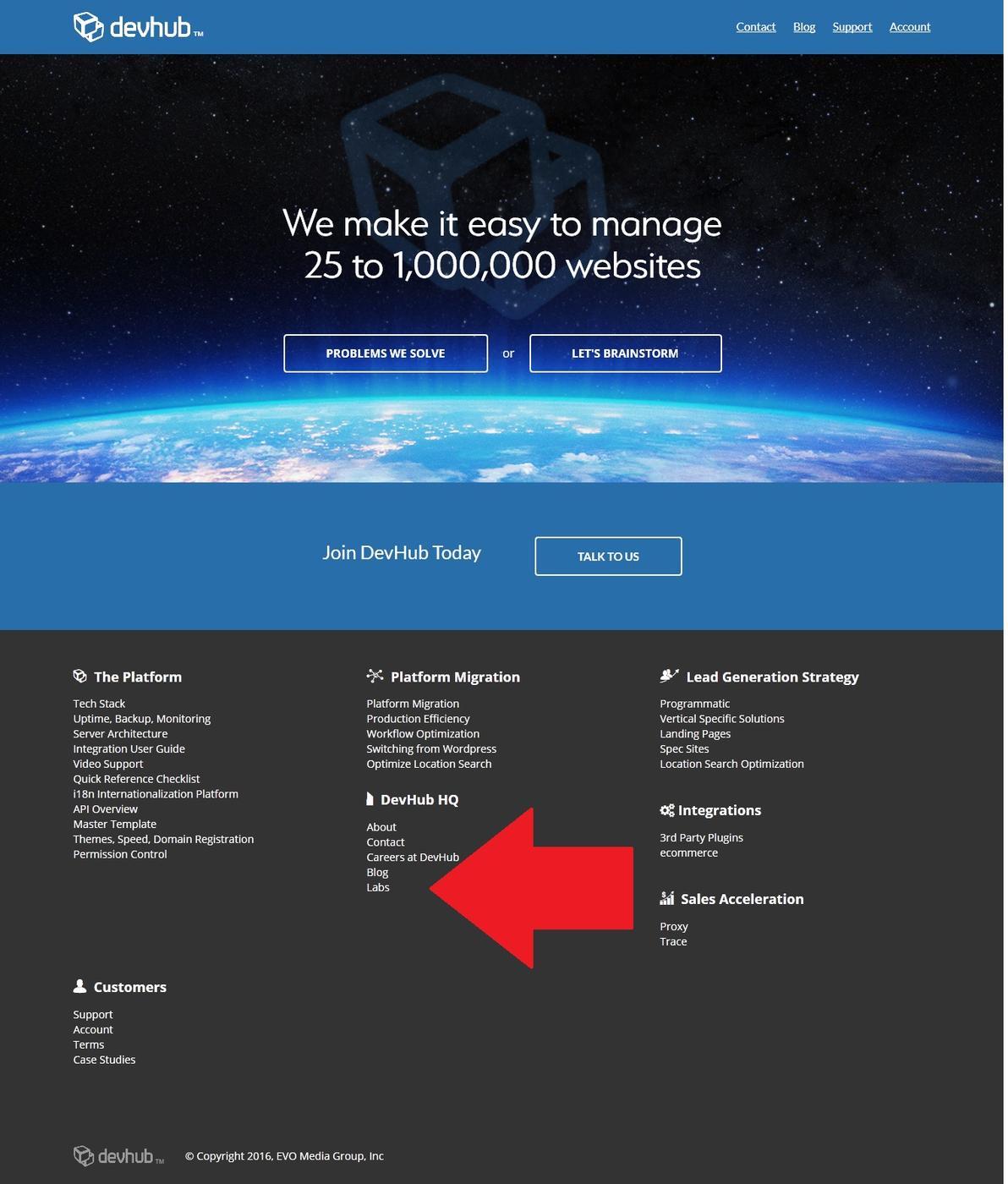 This interview was conducted by Joe Zappa @ Street Fight and Mark Michael co-Founder of DevHub about the launch of DevHub Labs and the future at DevHub.

Having a sound digital infrastructure is becoming a competitive must for both big and small businesses. For digital agencies that want to provide small-business and brand clients with websites at scale, building assets and keeping them updated can prove tricky. DevHub, which has been around since 2009, is a website-building platform that can manage hundreds of local sites for a single agency or brand.

This week, the company is launching DevHub Labs and is announcing the group’s first experiment, “TXT a Restaurant” — which will allow local businesses to try out a new digital tool: click-to-text, a new way to connect with consumers who may be hesitant to use the more traditional click-to-call. Street Fight recently caught up with DevHub CEO Mark Michael to talk about DevHub’s relationship with local businesses and what he’s expecting from the new launch.

Let’s start with the basics. What does DevHub do?
[In 2010], Daniel [Rust, co-founder and CTO] and I, got a call from what you and I would know as a traditional media company. They said, “Can we license your software?” We were getting a lot of press at the time about how we changed the way people can do websites, but it was geared toward a totally different market — not geared toward small businesses. But we realized that all these traditional media companies were losing their small business advertisers.

Fast forward to the beginning of 2015. Those media companies started splitting up digital agencies that were getting more specific about how to help certain types of small businesses. It was like, “Hey, we’re working with a bunch of real estate agents. What can DevHub do for real estate agents?” Or, “We have this national brand that has 110 locations, and they want to have this booking widget or this reviews map. What can DevHub do?”

So DevHub sits between a site builder and what we tend to call an enterprise CMS. Our cases [range from] a global agency that’s looking to unify one of their clients that’s on a bunch of different platforms, a national brand looking to create local sites for their franchisees, or a media company looking to offer digital products to small business. Lately, it’s been technology providers who are looking to differentiate their products.

How does DevHub serve local businesses?
DevHub has a mindset of building a scalable future in local markets and working with technology companies to improve their current product offerings.

We don’t sell directly to local businesses. Our whole thing is a license to the media company, the global agency, the national brand. One of the bigger value propositions we have is we don’t sell against our partners in the market. We want to win with you; whatever it is you’re trying to accomplish, if you want to build the best real estate agent websites, we host over a million products a day. So we’re able to look at a swath of 70,000 real estate websites that we have on our platform, and we can say, these five characteristics are the same. [We can say] that’s the most effective real estate site based on data rather than building the prettiest real estate website in the world.

How does the launch of DevHub Labs build on previous work and fit into the broader picture of what you guys are doing?
We’re headquartered here in downtown Seattle. Outside of that, we have about 232 DevHub professionals who are at the companies we license our software to. We’re getting constant feedback from them on what’s going on on the front lines with small businesses. So we’ve always had this constant feedback loop or what we call community-driven innovation where [a partner might tell us], “Hey, we’re finding [X problem] in the restaurant space,” so we hear that from one partner and we’re able to then ask another partner, “Hey, are you seeing this with your restaurants, too?” And we can adopt best practices.

We are also able to look at a million digital products that we’re hosting and look at patterns every day. One of the things we saw is on a lot of sites people are clicking as if they’re going to text, and they’re not calling. So that’s how DevHub Labs builds on previous work. Also, we can have experiments, build quickly, and see if there’s any use case out there where this might work.

DevHub has found that 44% of small businesses lack a responsive mobile site. Can you talk a bit about the problems small businesses are facing and how what you’re doing will help them out? What constitutes a responsive mobile site?
Almost every day we’re asked about doing a platform migration. Some people call it replatforming. Basically 99% of other web platforms out there if you’re on their platform and you need to switch off their platform or do an upgrade so that sites are responsive, before 2014, it was generally impossible unless they were already strictly a mobile site builder. So what we were finding in those batches that we were migrating over to DevHub is that 44% of those were static email sites that you would recognize from 1996.

Tell me about the “TXT a Restaurant” initiative you’re experimenting with. What’s the time frame and what are its goals?
This is basically an experiment right now so far in Seattle. There’s over 1,000 restaurants, and we’re publishing the results for all of them on Wednesday. The idea is that those businesses, we believe their customers are already trying to text them.

Now, [we can say to small businesses,] “Hey, you’ve had 25 people wanting to text you this week or today, so don’t you want to see what they’re trying to tell you? Here’s how you do that.” [We are] trying to tell them, “Here’s why you should do this” rather than just telling them, “You should do this.” Sometimes the problem tech companies have is [they sell things by saying], “We just know it’s great.” We’re trying to come at it by saying, “Looks like you have the demand. Do you care to answer these questions? And here’s how you do that really simply.”

Assuming this thing rolls out into something more significant than an experiment, we can analyze what the conversations are and build AI around that.

So let’s say you show businesses there’s this demand, and they do want to enable texting. What’s the next step?
The beauty of what we have is, typically those restaurants, most of them have a site, and one of the technologies we have that we’re developing in our labs is this thing called Trace. What Trace does is copy the corporate look of a site exactly and fill in the middle. A lot of the time, we’ve used that technology when a national brand wants to roll out 600 local sites.

So if a restaurant is interested, we’d Trace their site and build out a mobile version that’s tech-enabled, and we would have at that point customers text that restaurant at any time. No apps at this point — everything is text-based.

Depending on the results, we would look to roll out an entire solution in Seattle by August. We’re waiting to see what happens. Seattle then Vancouver, Portland, then LA.