Enough with the bespoke platforms favored by traditional designers. It’s time to turn those designers into innovative developers; executing at the highest level - scale.

Be Rad: Win the team, impress the customer.

DevHub recently won an agency contract that had been in the works for years. Like: since 2014. The agency had tried using the long established  model of building one off sites using current CMS platforms but then having to make individual changes across thousands of unique sites. This became a nightmare. But the one thing you need right away is a thoughtful and robust CMS to handle the curveballs customers will throw your way. Enter DevHub.

Pull your team into a room and strategize. Trust us.

Yes, you could easily start going the conventional CMS route, but (1) its not cheap in the long run and (2) you’re creating more work. Here are three better (and cheaper) ways DevHub wins at scaling. 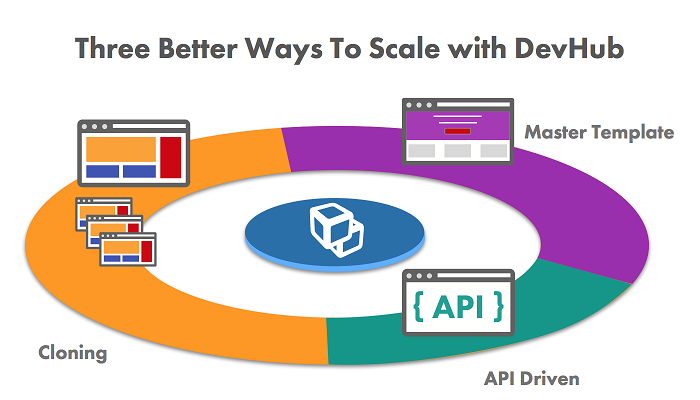 You hate the word ‘template,’ but there’s a better word for it - theme. Build the site ‘theme’ structure once and replicate.

Take a pre built template and ‘clone it’ content included. Any macros that you’ve used in content SEO tags..etc; are then shown on the new site.

Use the DevHub API to fully automate the creation and management of sites and landing pages without even entering the site builder or dashboard.