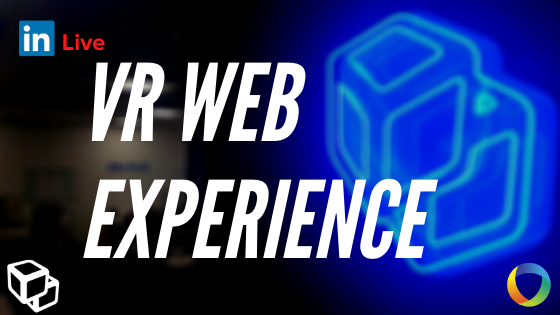 Hey everyone, thank you for joining

But if you're just joining for the first time,

This is Mark Michael, CEO/ co-founder of DevHub

Based here in Seattle, Washington.

Today we are going to be talking about the future.

All right, in our world,

Sites are kind of foundational

To almost all marketing efforts.

That is what people are looking up.

That is what SEO is about.

That's what paid traffic is being

Driven toward any version of a site

Whether it's a landing page, a micro site,

A catalog site, a promo page, whatever

It still falls within the basic framework of a site.

Obviously with the world doing what it is around us,

Kind of on the record is

How we kind of think about

So I think most of us

If you've tried any of the VR devices

That are out there, even the Google Cardboard thing,

The Samsung, whatever their thing is,

To me, the Oculus go

The experience in there is so much different.

So let me give you a quick story.

Wherever the latest one is.

And you know, he has his phone here.

He has this controller here and he has a screen there.

And he's got his headphones on

Or whatever he's doing,

And he's talking to people.

When you do it in the

You are sitting actually at a poker table table,

An avatar of yourself.

And as you look left and right,

You're actually looking left and right.

And then when someone tells you,

You're sitting at the table.

Probably have not really tried VR

And malls and whatnot.

But we had definitely never wanted

To build a technology platform

That was static to what's happening today, but also

Kind of where the future is going.

And so in that, we will be showcasing

Some of our concepts of

In the coming weeks.

We have just over 154 brands that use DevHub to deploy a lot of websites.

And a lot of those, the reason why

There's a lot of websites because

Typically it's around local markets.

And we always say that brands,

People interact with their local store,

Not the brand at the national level.

And some local stores have

Obviously other stores and different geographies.

And so, when you start to think about, like,

If you're just trying to look up

Anytime in the short term.

But if you think about companies

Or any furniture or appliances

Or potentially the future of travel

All of those experiences can be put into a VR world

That the consumer then really immersive, isn't it?

Which is the ability, you know, I take a picture of,

You know, my house,

And I can superimpose the couch there.

But again, there's still that disconnect.

Oh my God, that's what that thing looks like,

Or that's what that is.

Without getting too crazy.

I actually also believe that the future

As a whole I actually

Will be kind of the same thing.

I think homes will be built with

So with the VR experience.

Information about when a fast food chain is open,

So one of the Examples

I was talking about over the weekend

Or VR experience probably not

Imagine if you have a travel space in your house,

With heat and cold, and whatnot.

Are potentially either climbing

That mountain or sitting on that beach, you know,

Today you can see it like all while this is nuts,

If you feel it around you,

That's where I believe the future is going.

And DevHub will have

A part in that future,

Obviously more in the marketing sense.

And it got a little off course, with the architectural

Aspects of this whole thing.

Produce here in the coming weeks

And months and probably years ahead even

Will be around where we

See the future of sites going

Obviously we can do anything that a site

Can do and we probably

Do more than most people can

Or most technologies can when it comes

To integrations and whatnot

And flexibility and of course scale.

But where that's headed, you know,

In a fully immersive experience.

So I wanted to kind of put this video

Out there as an intro to that.

And kind of how DevHub

Will play in that world.

And we later this week,

I believe we should have mockups

kind of where we think that's going.

So with that, thank you for joining this LinkedIn live.

Let me go ahead and just share it with

instead we can make that a blog post to cool.

All right, I think I'm good on this one,

Cedric, thank you for teeing it up.

Thank you for joining this LinkedIn live.